5 Reasons Why Sharks Deserve Their Own Week

It’s the most wonderful time of the year… Shark Week! Typically, I’m not one to give into hype. I still have never seen an episode of Game of Thrones, and I probably never will. So then, why is Shark Week such a big deal?

I’ll tell ya why, because sharks are f*cking awesome.

Sharks first appeared over 400 million years ago, meaning they outlived FIVE massive planet extinctions. Not even the dinos can keep up with these underwater ballers.

Talk about being #relatable. Sharks that are on the hunt for their food will stop at no cost until they are fed.. sounds a lot like me when I’m ready for lunch. But, unlike us, sharks will only eat once or twice a week.

Don’t judge Jaws by its cover. Sharks are often depicted as mindless killing machines. In reality, sharks don’t hunt humans. They actually think we taste pretty gross. But, if a shark mistakes you for a seal, the only way for them to know the difference is to take a bite. 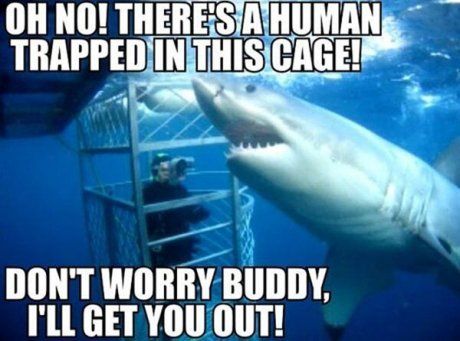 4. They live in awesome places

To get up close and personal with these bad boys, you have to visit some pretty badass places. The “Great White Shark Capital of the World” is located in Gansbaai, South Africa. Located about 2 hours south of Cape Town, Gansbaai offers experiences where you can dive into their environment. These excursions are very safe because the most dangerous animals are in the cage… the humans.

5. They’re both feared and loved

Niccolo Machiavelli has said, “Since love and fear can hardly exist together, if we must choose between them, it is far safer to be feared than loved.” Sharks say, “You can love me, but you’ll also fear me.” While yes, sharks are far less ferocious than we are led to believe- I still wouldn’t want one sneaking up on me. But how can you hate such a beautiful beast, whose presence keeps an entire ocean ecosystem balanced?

So, I will not only give into the Shark Week hype, I’m adding to it. Follow along with our #SharkWeekSaga if you think sharks are just as Jawsome as we do!