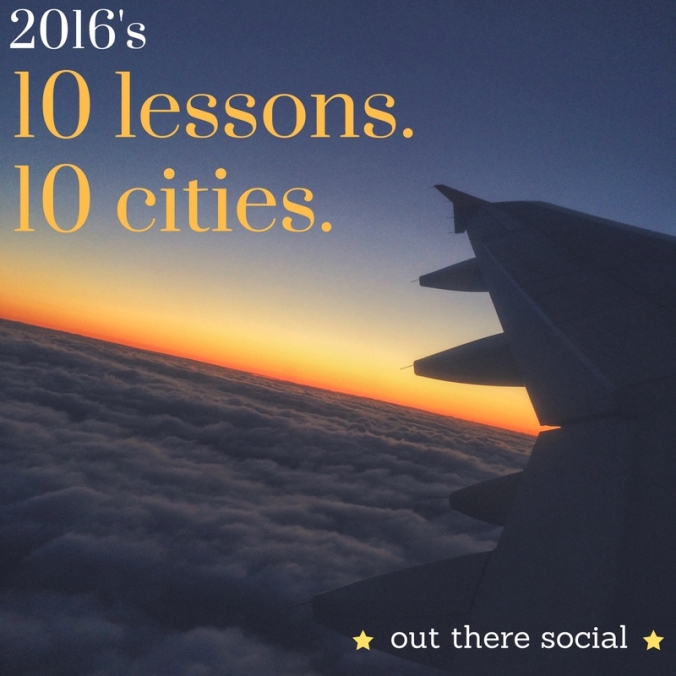 This year, I have jumped around the map quite a bit! Here are the most important pearls of wisdom from each city that I visited in 2016…

1. The key to surviving Mardi Gras is your squad. New Orleans, LA

My first adventure of 2016 was to New Orleans, LA to be part of the Mardi Gras madness. My college roommate and I were overdue for a reunion, and decided to go hard rather than going home. Mardi Gras is just as wild as it is said to be, so if you are going to fully indulge, make sure you’re surrounded by a squad that is just as ready as you are! More on surviving Mardi Gras…

2. Keep in touch with those you meet along the way. London, England

One of my favorite parts about traveling is the eclectic collection of friends I make along the way! Social media makes it easy to keep in touch with the people you’ve met all over the globe. In London, I met up with a friend from Wales that I met in Santa Monica. In New York, I met up with friends from London that I met in Miami. As unlikely as it may seem, you never know when you will cross paths with someone that you’ve met far, far away!

Amsterdam was a tospy turvy city to visit. Its weird ways won my heart through their canals, coffee shops and eroticism. As much fun as I had, touring the land just north of the city was my favorite part of the Netherlands. Visiting the windmills was a unique experience, which made me feel like I have traveled back into the time of Van Gogh. Don’t hesitate to look at the tours offered within a city center- they will offer convenient, cost efficient ways to explore off the beaten path!

4. Thou shall be adaptable and flexible. Dublin, Ireland

My time in Dublin was split between two airbnbs. The first was a luxurious two bedroom apartment, with a balcony, two bathrooms, and hotel quality at home feel. The second one required an uphill battle to the top floor, and 2 hours notice if you wanted to use the hot water. Regardless of what the sleeping arrangements were, it didn’t take away from the fun that Dublin had to offer. From riches to rags, as long as you have good friends and good spirits you’ll have a good time!

I celebrated my quarter of a century birthday this year under the sun in Antigua. If I could relive one day out of this entire year, it would be the one pictured. Momentous occasions, such as a big birthday, should be celebrated! While I wish I could spend every day popping champagne on a catamaran, it is a day that I will look back on for the rest of my life. Another lesson I learned during this year’s adventures is the value of GoPro footage! Going into a trip with ideas in mind makes it easy to create a fun music video, like this one, that we made to the song HandClap!

6. The advice of locals is worth 1000 yelp reviews.  Copenhagen, Denmark

I said it before and I’ll say it again… I love Airbnb. In Copenhagen, I stayed with a group of girls who were excited to give recommendations as soon as we arrived. If it weren’t for them, I would have never ended up checking out Paper Island – aka street food heaven. This artistic haven was one of my favorite spots in the entire city! Aside from my Airbnb hosts, great advice was imparted on me by the manager of a restaurant I stopped in for dinner. He wrote directions on the back of a napkin that led me to the beautiful gardens of Frederiksborg Castle, in the town of Hillerød.

Ok, I know I have proclaimed my love for Airbnb more than once in the post, but this year I experienced my very first home sharing hiccup. I arrived to my Budapest apartment in the cloak of night, and followed my host’s instructions to retrieve my key step by step… to no avail. After much back and forth (thank god for portable wifi!), and being scared out of my mind by the fact that there were people in the apartment that I have rented, I learned that I had been double booked. I was lucky to have a travel buddy that helped to keep me calm and laughing at our terrible luck, as we quickly readjusted, finding a hostel to stay for the night.

8. Oktoberfest is the best. Munich, Germany

I regret every year that I have not spent at Oktoberfest in Munich! At first, I thought this was a celebration that revolved around beer. While yes, this is true, I had no idea of the fun and games that take place outside of the beer tents! Growing up, rides were never my thing. In Six Flags, I’d rather go on the safari than go on a roller coaster. However, the spirit of Oktoberfest (and many liters of Spaten) have helped me to face my fears and go on every single ride the festival had to offer. Twice.

9. Be carefree and confident. Savannah, GA

My adventures in the South began with a reunion with my college BFF & cat’s namesake, Jordan. I can go on and on with what I love about Savannah *cough cough, open container laws*, but the highlight of my trip was crashing a 1986 high school reunion. Not only did we mingle with Effingham County’s finest alumni, we left a lasting impression on the dance floor. The memory of this night is 100x greater than times we would have looked back on if we had decided to just go to a bar instead…

10. Solo travel is good for the soul. Charleston, SC

I have such great memories with all of my friends and family that I have traveled with this year, but the experience of traveling alone is incomparable. Traveling alone reminds you what you are capable of. It forces you to make time to put yourself first. After a solo adventure, you are left feeling confident and empowered. In our day to day lives, self-love often falls to the back burner. Don’t neglect to spend some time with the greatest travel buddy there is… yourself!