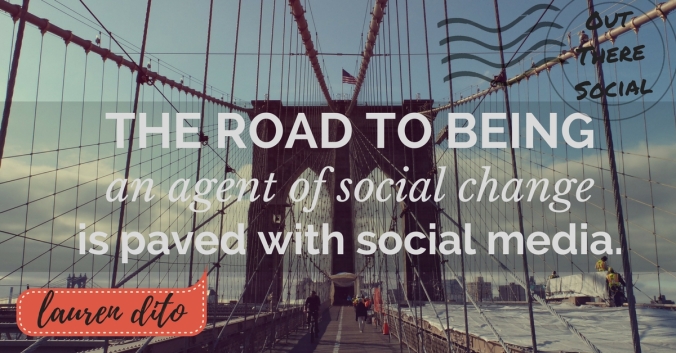 I am here to debunk several patterns of close-minded thinking. What comes to mind when most people think social media: selfies, hashtags and narcissism. They think, this generation doesn’t stand a chance, because they are so self absorbed in the world wide web, they lost the ability to communicate face to face.

While yes, I’ll have to agree, the number of duck faced selfies is disheartening, I am going to have to take a stand against the pessimism surrounding a world that is so near and dear to my heart.

The social media boom happened within my lifetime. I remember my mom taking me to the library as a kid, playing computer games, teaching me to become more savvy than I was able to realize. Next came my family’s first desktop computer being installed in the den (…it was a Dell, and I’m not talking pop singer). Soon after came “AOL”, when I created my first screen name: Cimba12000 (Cimba was my dog, don’t ask where the 12000 came from). What spiraled after that was a world-wind of AIM profiles, away messages, buddy chats, homepages, and icons, until one day, a brand new world was created: MySpace.

I was the girl people would give their myspace passwords to, so they could “pimp them out.” I became proficient in HTML by the 7th grade, and would help create “sick layouts”, to make my profile stand out amongst the pack. When I started high school, a friendship began when a girl came up to me and said, “Hey! I recognize you from Myspace…”

I followed the ebbs and flows of this world of social interaction, and kissed Tom from Myspace goodbye when Facebook entered the room. At first, it was strictly for college kids. Soon enough it became open to the general public, and naturally, I was one of the first to make the switch. This gave me the learning curve I needed to hit the ground running, maintaining my throne as a social media queen.

Fast forward to today, we’re switching app to app from Instagram, Pinterest, Tumblr, Youtube, and Google+, just to name a few. Social media as become an entity that most people can’t remember life without. Being so engaged in the timeline (Facebook reference intended) of this crazy world from the start is what gives me such passion for it, and has led me to my current career: Social Media Publicist.

It drives me crazy when people say, “Oh, so you just Facebook for work?” Another line that drives me nuts, “You studied psychology, when are you going to get a REAL job in the field…?” Ouch. The science that goes behind social media is an intricate one. If you think about it in simplest form, social media is people’s thoughts, conversations, and actions being recorded; allowing us to study it in both a qualitative and quantitive way…. that is a psychology major’s dream.

In grad school, we were inspired to become not psychologists, but agents of social change. As we went up, one by one, presenting our capstone research, many people applied their studies to the world of mental health counseling: hospital settings, rehabs, schools, and even businesses. Then, I went up there, and presented my research on using social media to change the stigma of mental health. After I concluded, my professor, and director of the Master’s Program stood up and said, “This is what Community Psychology is all about. Using the lessons and techniques we have learned, and applying them in a setting where people would least expect it.”

Taking what I have learned in the classroom, on the internet, and in this crazy reality called “life,” I bought a web domain and named it “Out There Social.” I wasn’t sure what to do with it, but I knew I needed it.

Here I am, on my 3 year anniversary of working as a Social Media Publicist, virtually screaming from the rooftops: Social Media is what we make it. It’s something that’s created by us… so if we don’t like what we’re seeing, let’s change it.

Out There Social became my platform for promoting resiliency, confidence, and positive mental health in the most fun, exciting, and aesthetically pleasing way I possibly could. I truly believe the power is in our hands (quite literally, our fingertips), to change the world. Next week, I will begin my journey on the road to a PhD, studying the use of Social Media in the world of psychology.

On my first day of grad school, I was assigned a question, “What does it mean to be an agent of social change?” So here it is, my response, (written in Sept. 2012), which perfectly sums up everything I believe about social media, why I work in the field, why I will continue to study it, and why I am so head over heels in love with it:

“In psychology, the tools we need to change, help, or make a difference are already within us. The job of a psychologist is to communicate to the world how we access these tools, and what to do with them. We are surrounded by psychology whether we recognize it or not…. A psychologist, or an agent of social change, has the important job of making the components of the field recognizable by everyone.

The important role of psychologists is to learn from this, and inform the population on the skills they need to properly handle the problems life will throw at you. As time progresses, problems become more complex. Technology has changed drastically since the time of Miller’s addresses, which introduced a new version of old problems– such as cyber-bullying. Face-to-face communication was also greatly impacted by the changing times, meaning some people relate better to a computer screen than a human.

On the bright side, technology makes psychological research and information instantly available. Miller states, “the practice of valid psychology by non-psychologists will inevitably change people’s conception of themselves and what they can do” (Miller, 1969). Due to the fact that technology connects both psychologists and non-psychologists, if used correctly, this may be the tool we are looking for to implement a mass social change.” – Lauren DiTo